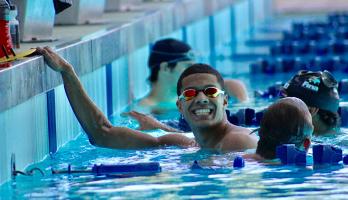 In addition to economics and precalculus, Jarod Arroyo has spent the last year learning a lot about balance.

Arroyo, an elite swimmer, was in the first graduating class of ASU Prep Tempe charter high school in May, finishing with a 4.0 grade point average. With high school behind him, he’ll spend the next year focusing on training for the 2020 Summer Olympics in Tokyo. After that, he’ll swim for Arizona State University.

“The key is staying on top of it and not getting behind,” Arroyo said of his life balancing school and swimming. His days started at 5 a.m., when he would swim for two hours on the ASU Tempe campus, then drive to school and go to classes, and then return to the pool for another three to four hours of swimming and conditioning. Then it was dinner, homework and mental conditioning before bed.

Arroyo, who is a member of the Puerto Rican national team, traveled frequently for competitions.

Jarod Arroyo (left) and Andre Arnold were the only two members of the first graduating class of ASU Prep Tempe. They were among 230 graduates of all the ASU Prep schools at the ceremony on May 24. Photo contributed by ASU Prep

“I have to be proactive,” he said.

“I went to Argentina for three weeks for the youth Olympics last fall and I got ahead on all my work and turned it in before I left and when I came back I was perfectly fine because I was proactive.

“I just have to make sure that I tell my teachers.”

In addition to working with his teachers, he was able to keep up because some of his work was done online. ASU Prep Tempe is a blended learning campus that infuses technology in the classroom. Arroyo, who had to take both Algebra 2 and precalculus this year, learned on the ALEKS adaptive learning platform, according to Joshua Roth, principal of ASU Prep Tempe.

“So as he gets problems right or wrong, it’s adapting to where he’s at, reinforcing things or letting him get ahead on things he does know,” Roth said. “Without that platform he wouldn’t have been able to do it.”

With only 48 students, the underclassmen looked up to the two seniors, Roth said.

“Jarod’s a really good role model for all of our students,” he said. “Being a small school and trying to find an identity, we were really happy to have Jarod with that senior leadership, and his presence and his demeanor.”

Arroyo’s competitive swimming career has meant sacrifices for his family. He moved to the Valley from Utah in 2016 with his mother and sister to train with the Pitchforks Aquatics swim club and its head coach, Fernando Canales. But Arroyo’s father, a professor of physiology at Brigham Young University, stayed behind. His father is from Puerto Rico, which allowed Arroyo to join the national team at age 15.

“Someday, I think by achieving my goals, that will repay them because they’ll know it was worth it,” he said.

He credits his parents with encouraging him to take swimming lessons at age 4 — even though he was afraid of the water. By age 10, he knew swimming was for him.

“My parents made sure I played lots of different sports. I played basketball, baseball, soccer, tennis,” he said. “And when I was 10, they said, ‘You have to pick one’ so I chose swimming.”

This summer, Arroyo will compete in the Pan American games in Peru, where he could qualify for the 2020 Olympics, and possibly in the world championships in Korea. His specialty events are the 400- and 200-meter individual medley and the 200-meter butterfly.

“When I was 12, watching the Olympics would inspire me,” he said. “And when I watched them in 2016 was when I realized how close I was to qualifying."

Arroyo has idolized Michael Phelps, the swimming legend and most decorated Olympian of all time, with 28 medals, and was thrilled when he got to meet him.

“He’s really chill and laid back. I thought he would be so intense but he’s the nicest guy,” he said.

Phelps’ coach was Bob Bowman, who is now head coach of Sun Devil swimming and diving, which Arroyo will join in fall 2020.

“I’m so excited to come to ASU because not only do they have amazing facilities, but the men’s team has a really good culture of excellence and that’s thanks to Bob Bowman,” said Arroyo, who plans to double major in business and kinesiology because he wants to be a chiropractor.

But for the next several months, all his energy will be on getting to Tokyo for the 2020 Olympics.

“I like to visualize myself there,” he said. “That helps me to push through the hard practices toward the end goal.”

Stefanie Contreras, marketing and communications manager for ASU Prep, contributed to this story.